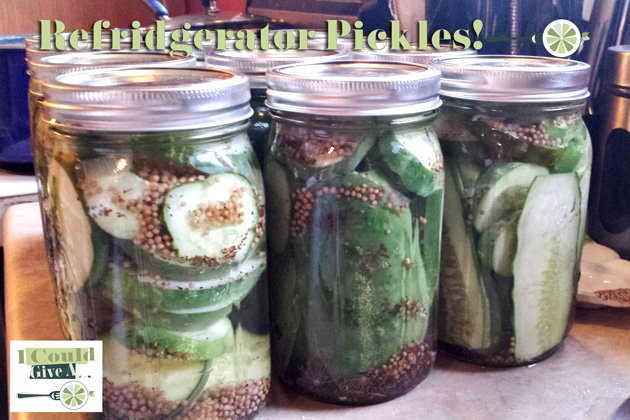 Dill pickles are always a compromise.  Okay, that sounds a bit strange to say, but in the pickling world, there is always a trade-off between taste and shelf life.  If you need industrial-strength pickles that will last through a zombie apocalypse, you’re going to have to prepare your jars like they are going to be used in surgery, and crank up the levels of salt and vinegar in the pickle juice. That results in limp, sour pickles that have zero hope of ever tasting like cucumbers in any way. Enter refrigerator pickles! 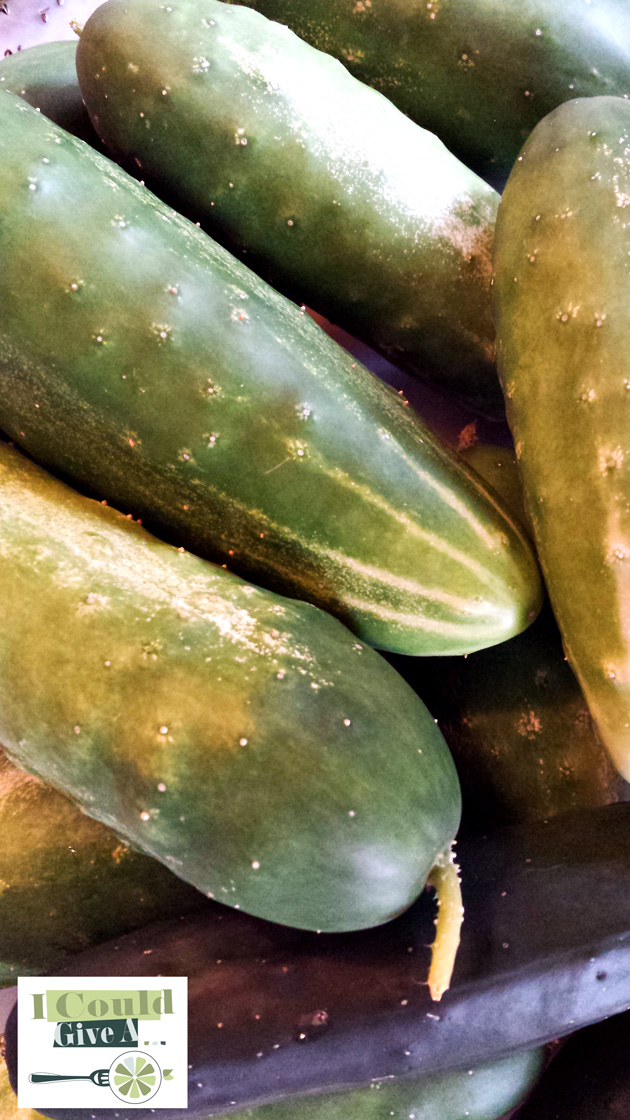 Organic from our garden, with love!

If flavor is what you are after, you’re going to have to preserve your pickles in a refrigerator, and it’s probably wise to use them within a year.  The good news is that unless you make an excess of them, when they taste great, they’re usually long gone before then.  So this is the angle we’re taking here.   …Refrigerator dill pickles that taste better than the expensive pickles in the refrigerator section of your grocery store, and they cost practically nothing! 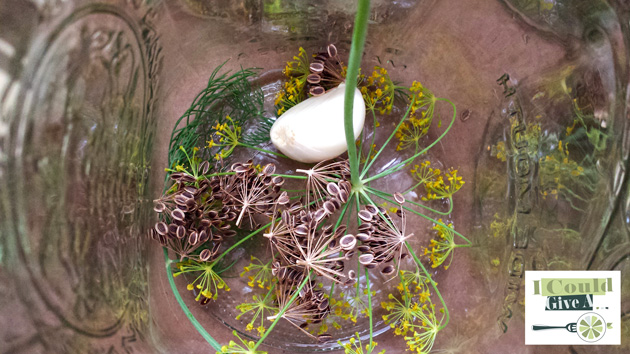 Good pickles always start with fresh ingredients.  We tend to plant our dill and cucumbers in the garden at the same time every spring, because by the time the cucumbers are ready, we always have dill in all three of the necessary stages.  If you can grow the dill and cucumbers yourself, then do so!  They are really easy.  The variety of cucumber that we grow is a prolific heirloom called “Straight Eight,” and they require little care.  Dill will grow just about anywhere, whether you want it to or not. 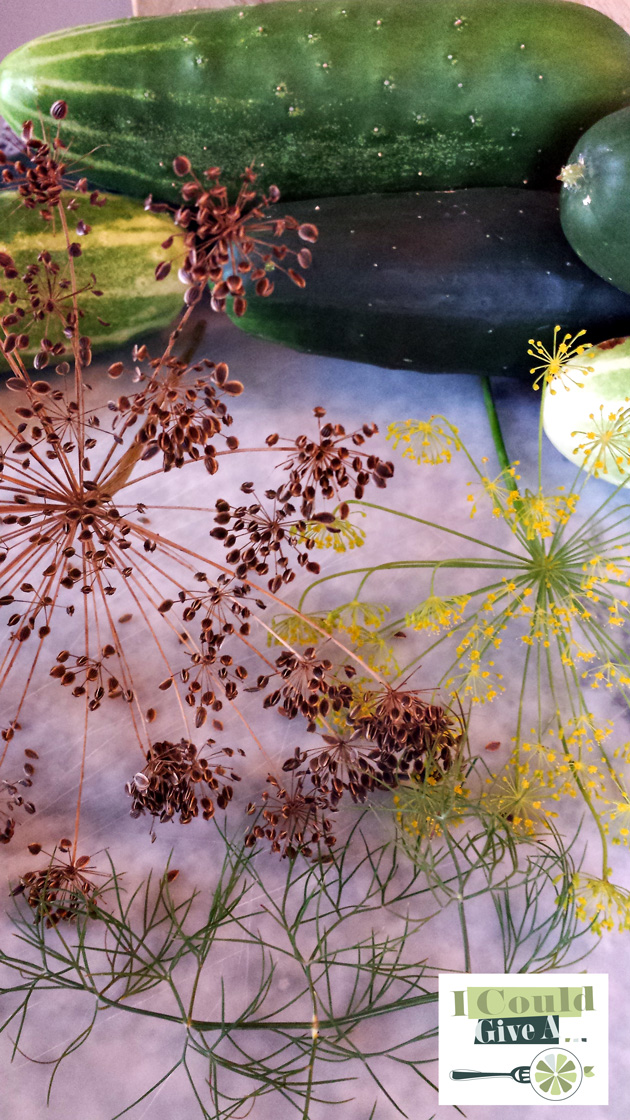 Cucumbers and dill cukes from the store are seldom suitable for crisp pickles for many reasons.  They are normally too old and mushy, are often coated in some mystery wax that prevents the absorption of pickle juice, and they are just too danged expensive!  “Fresh” cucumbers often run from $1 to $2 apiece in some stores, with ones stamped “organic” costing more at times.   When you consider that it will normally take at least two large cucumbers to fill a quart jar, you risk having several dollars per jar in waxy, soggy, GMO, pesticide pickles.  Instead, grow them yourself, or support your local grower at a farmers’ market where you can get fresh, organic cucumbers on the cheap.   …Ditto all the above for dill.  For the best dill flavor, we always use fresh dill flowers, leaves, and seeds. 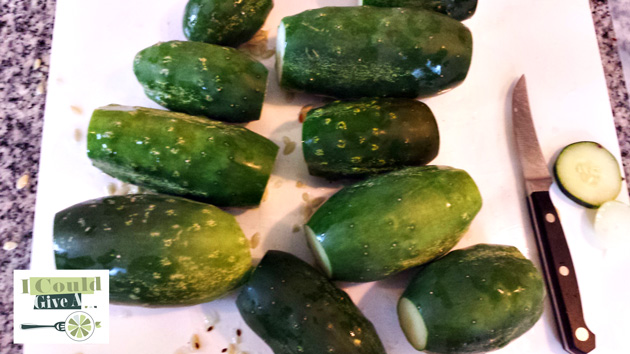 Onion, garlic, spices, and vinegar:  Fresh is always better, but for pickles, these things really are just as good if you get them at the grocery store.  As for vinegar, anything white, distilled, and  gluten-free will do.  If you can somehow make your own vinegar, call me impressed!  We use Kroger Brand. 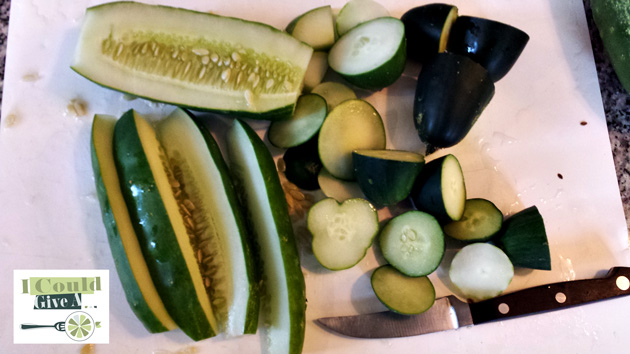 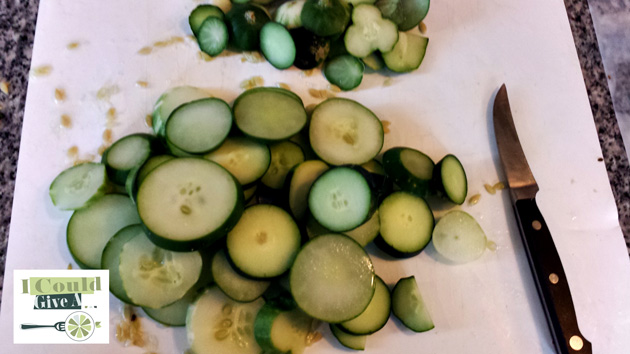 Chips are a hamburger’s best friend.

Jars come in boxes of 12, and since we have a plethora of cucumbers and dill, this recipe will be for approximately 12 quarts of pickles! 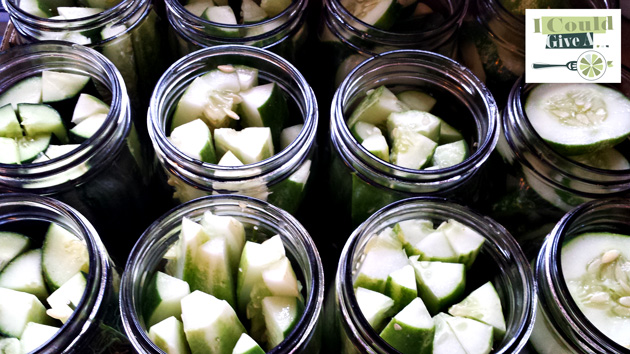 We love to stuff things in jars!