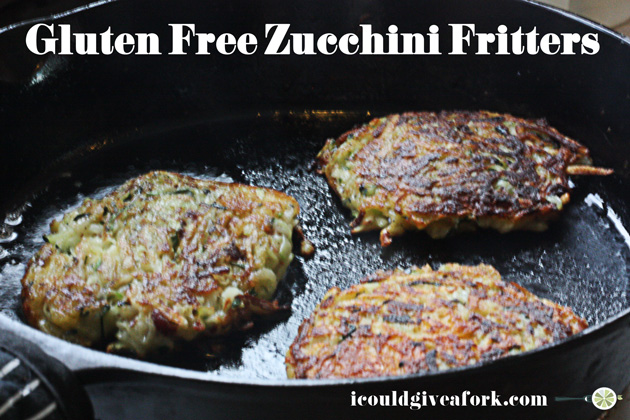 Around here, we grow a lot of zucchini – and with a 50′ X 75′ garden, I really do mean A LOT. Honestly, recipes for zucchini get boring for me because I am not into making zucchini brownies and cupcakes and such, unless it’s zucchini bread. I like to cut it up, shred it and freeze it for later use, but I recently came across a recipe for gluten free zucchini fritters and gave it a shot.

I first made it using this recipe from Gluten Free on a Shoestring, but I thought it needed a little, I don’t know…MORE. They were tasty, but kinda reminded me of just plain potato pancakes, and that’s good, but we don’t do anything plain around here. It’s not in our nature.

I like doing posts with lots of pictures that help you step through the process, but my camera battery died yesterday while adapting this recipe, and since I have two of them, I went to grab my spare. My spare, which was sitting on the shelf ABOVE the charger…the one I put there myself last week because it needed to be charged…the one I forgot to put on the charger. Both batteries were dead. Complete bummer, but I charged it and got today’s shots where I freeze them in my little Ziploc vacuum sealer so all is really not lost.

I love adapting and changing recipes that I find on the internet and making them my own, and this was no exception. I really loved how these turned out the first time, so I made some changes as my family are BIG cheese heads and added bacon, onions and shredded cheese. The result? AWESOME! They loved them better than the first ones so this one is definitely a keeper!

First, I fried up a pound of bacon and removed it to cool so I could crumble it without burning myself. With the remaining bacon grease, I threw some shredded onions in it and cooked them until they had a little crunch, just before they turn kind of soft and liquified. I shredded the onions because I thought maybe the kids wouldn’t even notice, and I was right, they didn’t even ask if there were onions. Score one for Mom here because we LOVE onions and I have to find clever ways of disguising them from the kids.

After I cooked the onions, I removed them from the skillet and drained them well on a paper towel because there wasn’t a need for the extra grease here, and although I hated NOT using the grease, I’m glad I did it this way because they turned out perfect!

I put the ingredients together following the original recipe and then added my crumbled bacon, cooked onions and a bag (8 oz) of shredded sharp cheddar cheese. That was it – just combined and then fried them in olive oil. Originally I thought frying them in the bacon grease would be off the charts, but the onions used the grease and left a kind of thick onioney-bacon sludge, so I got out another cast iron skillet and heated some olive oil in it for a nice, light fry on these puppies.

The result? A bacon cheddar zucchini potato cake that was OUT OF THIS WORLD! The best part was I had enough left over to freeze and use later! I lined a jelly roll pan with parchment and put the cooled fritters on, then topped with another piece of parchment and put the rest on top – I covered the whole thing with aluminum foil and popped them into the freezer for a few hours. 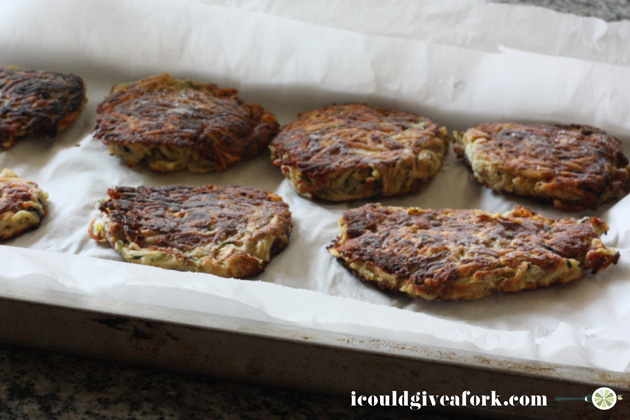 My frozen fritters all ready to be tucked and sucked!

I grabbed them from the freezer and divided them into 2 dinners – so I got 3 dinners out of this with 7 people to feed (Yay! I just high fived myself!) but I had additional kids here last night so I am really not even sure how many were eaten, because the eating began before I even finished cooking them all. 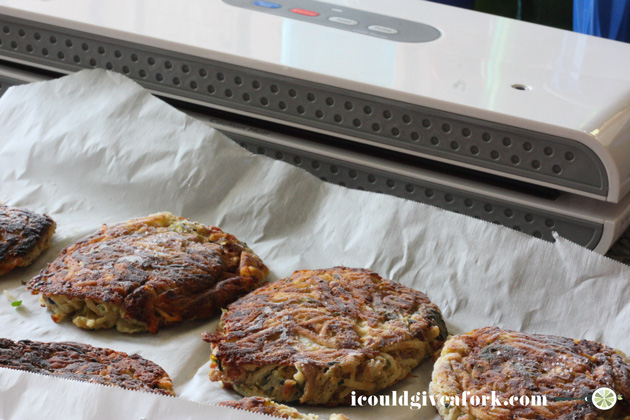 See how great they turned out! I tried using my trusty Tupperware hamburger press, but I couldn’t get them out of the mold in one piece. Then I tried to patty them up like burgers, but they lost their shape. So – this is what I figured out last night:

1. Grab about a half a hand full and put into skillet.

2. Take a metal spatula (if you are using cast iron) and go around them to make the shape you need by going around the edges and then flattening the tops.

When they start to cook, they start to stick together, and everyone knows that they will kind of stick to the bottom of the cast iron long enough to run a spatula around it to make the shape – but you must be kind of quick here because once they get a good fry on them, they will slide around in your skillet (if seasoned properly) and that makes it impossible to get them into a round, hamburger like shape. A few of mine were kind of oval at first until I figured this out. I wish I had pictures for you, but my batteries were still blinking red at this point – sorry!

After I froze these bad boys, I divided and used my Ziploc to suck and seal into perfection this wholesome goodness! I figure it would take about 10 – 12 minutes at about 350° in the oven to use them for dinner another night. I’ll update this post later if that is not the case! We don’t want to burn these little morsels, now do we? 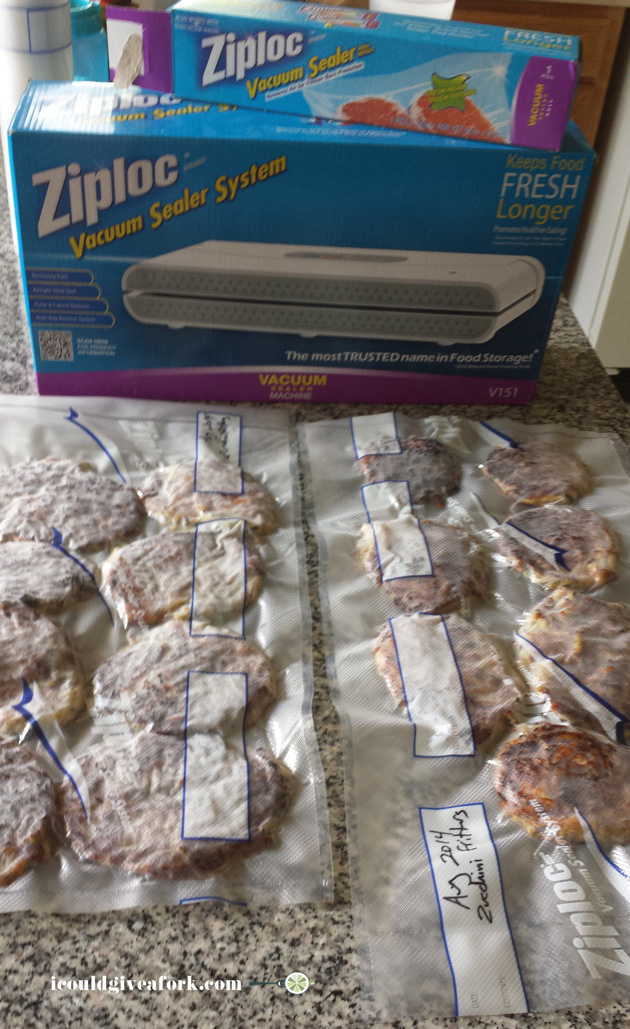 Awesome and ready to be put back into the freezer!

Check out the recipe – and don’t forget to save it to your Ziplist if you use it!