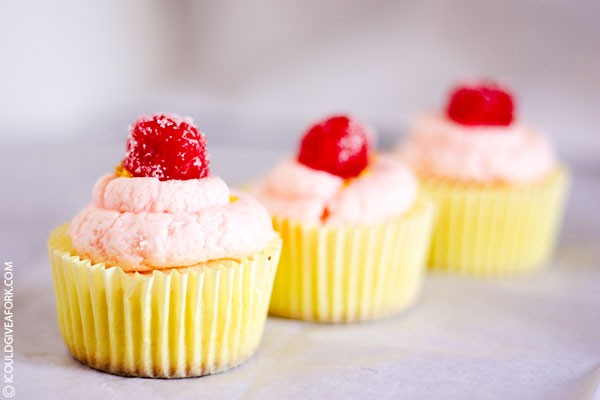 I cruise around the internet almost daily looking for good recipes to make, it’s my thing. I’ve been following a site called Simply Gluten Free and I must say that I LOVE her cupcake recipes book. Click the image below to get your copy: 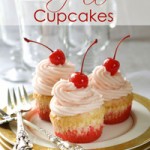 Every year, I go to Easter dinner somewhere else, I have not cooked on Easter since, I don’t even remember when. This year, I took my Mac & Cheese and Pink Lemonade Cupcakes from Carol’s book. Oh my goodness but they are sooooo good!

I didn’t have another lemon to make the lemon garnish, and I added the lemon zest to my frosting, but they turned out so amazing that I wanted to share! The link to her recipe online is at the bottom of the recipe! 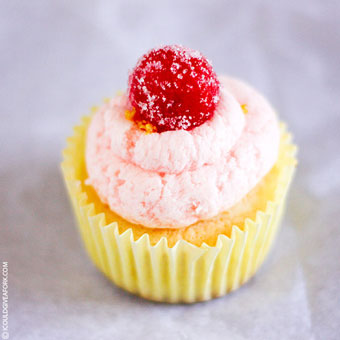 I also rolled my cherries in some sugar because I just thought they would be delish, and they were, but I have copied her recipe in full below without my changes. 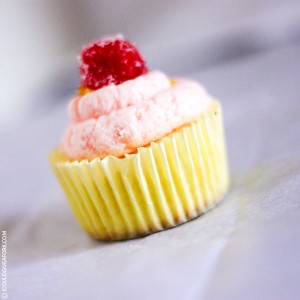 !Cupcakes
Preheat oven to 325 degrees. Line a standard muffin pan with paper liners.
Separate the egg whites from the yolks putting each into a large mixing bowl. Beat the egg yolks in a mixer, preferably fitted with a paddle attachment, on high speed for 5 minutes or until they are lemony yellow in color.
Zest the lemon then squeeze the juice. You should have ¼ cup of lemon juice, if not add a little water to make ¼ cup total. Add the lemon jest, juice and salt to the egg yolks. Mix to combine. With the mixer running on low speed, gradually add ½ cup of sugar. Beat the mixture on medium speed for 4 minutes or until the mixture has doubled in volume. Turn the mixer to low and gradually beat in the flour. Mix until just combined.
Beat the egg whites on high speed with the whisk attachment until foamy. Gradually add in the remaining ¼ cup sugar. Continue to beat until glossy and stiff peaks form. Fold half of the egg whites into the egg yolk mixture then fold in the remaining whites. Fold until the mixture is no longer streaky. Put the batter into the muffin cups. Bake for 30 – 35 minutes or until the tops are lightly browned and spring back slightly when touched. Remove from the oven and let cool in the pan for 5 minutes. Remove to a wire rack to finish cooling.
!Frosting
Zest and juice the lemon – you should have approximately ¼ cup of lemon juice.
Beat the butter in a mixer, preferably fitted with a paddle attachment, until creamy. Add the lemon juice, salt, 1 cup of powdered sugar and the maraschino cherry juice. Beat until smooth. Add the remaining powdered sugar and beat until combined. Fold in the lemon zest.
!Garnish
Cut off a slice from each end of the lemon and slice into 6 thin slices. Combine ½ cup sugar and ½ cup water in a small sauce pan. Stir to combine and add the lemon slices. Bring mixture to a boil then lower the heat to low and simmer for 15 minutes. Pour some sugar into a plate. Drain the liquid off the lemon slices and gently lay the slices on the sugar with a fork or tongs. Cover with more sugar and let them cool. When cool, cut the lemon slices in half and toss then around to coat slices evenly with sugar.
To assemble, frost the cupcakes and add a lemon half and a cherry on top of each cupcake.