We’ve still got potatoes here, but I believe I have finally won the potato soup wars! Well, chowder is actually a rich soup typically containing fish, clams, or corn with potatoes and onions, but I’m allergic to shellfish and didn’t have any fish – so corn it was.

I actually had some cubed ham in the freezer, because I keep it for green beans and other things but I’m thinking that bacon would rock this recipe too. Maybe it would be better – but that’s just because I love bacon. It’s still my belief that bacon can make anything taste better, and I’ll hold to that until I’m dead. I’m that committed. 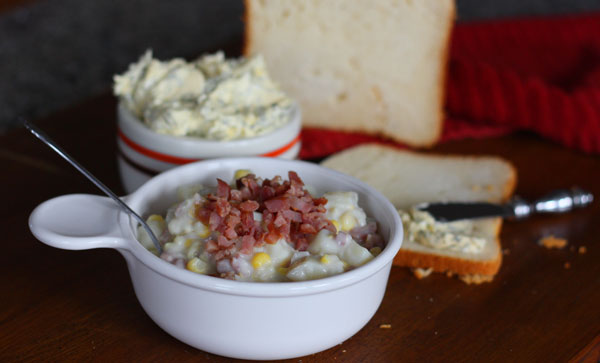 1. You won’t believe what it is so I thought (just a few minutes ago) that I’d do another post for you guys

2. I didn’t have that thought when I took these pics, so I don’t have any pictures of just the bread itself, so some creative Photoshopping will be in order because I don’t currently possess the ingredients to make it again and it is below zero up here in Ohio, so I’m not making a trip to the Kroger for a few days because, well – I’m delicate like that…but only on lazy days. Now back to the soup…

To make this gluten free ham, potato and corn chowder, please remember to use gluten free ham and some gluten free flour, or, well, it won’t be gluten free of course. You would be surprised how many ham or bacon brands are not gluten free, so check those labels. Gluten can hide in about anything – even bacon, I mean ham. This recipe makes something so creamy and delicious that you’ll be in love, I promise, it’s that good.

I realize that this is the third potato soup recipe, but to be truthful, there are just so many ways to make a potato soup that I have no problem making them all because I can make a big pot of soup and freeze for later. You have to get creative with this many taters, or you lose them. Even if you put them in the basement in a cool, dark place, they won’t last forever and we still have about 30 pounds left – and we are a big ‘ol tater eatin’ peoples. Wasting them would seriously wound me, I’m tellin’ ya.

So give this one a try. It’s quick, easy and so good you’ll agree – I’ve won the potato soup wars! Sorry Dan! 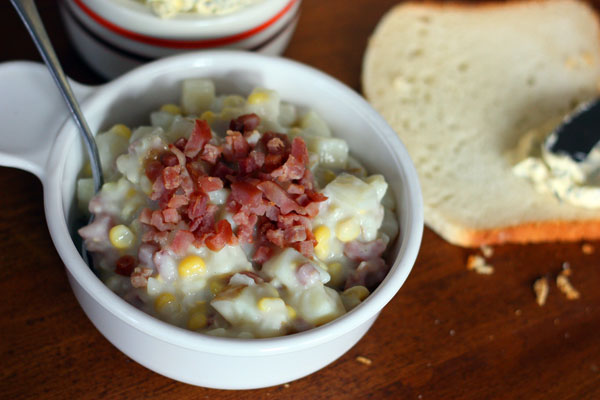