You are here: Home / Blog / Getting Derailed

I haven’t published any posts this week, and it’s already Thursday. My intention is to do at least two or three recipes a week, hopefully even more as time goes on. This week I got derailed.

I got what we like to call “glutened,” and I have been sick for days. My kitchen is safe, and by that I mean there is literally no gluten there. There are no contaminated pans, spoons – nothing. I can eat and cook and not worry about making myself sick.

…But I wasn’t in my kitchen, I made the mistake of going out to a restaurant. You see, even if a restaurant has a gluten free menu, that doesn’t mean that it’s safe. Companies are throwing around the two little words “gluten free” to get people to come in. I get it…but they are also poisoning us. That’s right – poisoning us.

I decided to give this particular place a chance because it’s been a very long time since I’ve even been inside of a restaurant. It was important to me that we choose a place that has a gluten free menu. This is not a diet for me. Not a lifestyle choice. I’m not trying to loose weight – I’m trying to just NOT be sick, it’s that simple. It’s not a fad for me and believe me, if I had the choice I would be wolfing down all of the things I really miss. I still cannot get my head wrapped around the fact that gluten is hidden everywhere. Why would it be in some things? Why? Because wheat is cheap and easy to use to thicken things? Oh hell, I don’t even know. I have such brain fog today that it’s difficult for me to even compose this post (that’s where husbands come in handy) because I cannot form a cohesive thought.

I just wanted a salad, okay? Just a salad. I ordered from the gluten free menu, and it would have been fine had it not been for the actions of one particular individual. See, this post isn’t a rant against the restaurant, it’s a rant against the man who treated me inhumanely. Yes – inhumanely. Another one of those jerks who roll their eyes as soon as the words “gluten free” come out of your mouth. For this – I hate the world. I hate that you see “gluten free” everywhere and that TV personalities like Joy Behar are saying that it’s stupid, or fake, or just a fad. I find it annoying – I find her annoying. In case you missed it – check this out:

When celebrities get involved with causes, it does bring attention to them – how can it not? We are glued to our TVs, computer screens, and mobile devices. We are a digital world now. We don’t have to wait for the morning paper or the evening news, it comes to us. So why are all of these celebrities derailing us?

I went into this place and looked on their NEW gluten free menu, but I only felt comfortable ordering a salad. Why get a burger with the risk of someone putting it on a bun, and then saying “Uh oh,” and just taking it off of that bun and throwing it on a plate? Because guess what? That small amount is all that it takes.

I ordered a salad and at the risk of getting that eye roll, I told the waiter that I absolutely could not have the tortilla strips and he confirmed that the salad on the gluten free menu did NOT contain them.

Some guy in a white chef’s shirt came out and put this monstrous thing down in front of me. It was covered with a mountain of tortilla strips. Now I hate to send anything back in a restaurant and I mean ANYTHING short of them giving me raw meat. I’ve seen the movie Waiting too many times to mess around. That’s just not me. However, in this case, I told the guy that it wasn’t safe for me, and asked if he could please remake it. I specifically explained that he could NOT just go into the kitchen and scrape those off, that the salad was contaminated and I needed a new one; and please forgive me because I didn’t want to be a bother or put him out in any way.

He took it back. When he came back (in less than five minutes) my salad had been reduced to chicken, lettuce and dressing. That’s it. No more avocado or pico de gallo – nothing!! I didn’t send it back. I didn’t want to put anyone out, and it was late. I was also starving by that point. That big pile of lettuce was okay, my husband shared his broccoli with me, and I was fine.

I ate the entire salad, and when I got to the very last two bites – I mean literally at the bottom of the plate – there they were – tortilla strips. I had already eaten this entire thing. The whole thing.

Honestly, I didn’t want to start anything, but I for sure didn’t want for this to happen to anyone else. No one deserves that! I also know that there are a lot of us who haven’t seen the inside of a restaurant in years. So I asked for the manager – and low and behold – it was the same guy! I explained that I found the strips and he looked me straight in my face and said, “No ma’am, I remade that myself.”

Really? You remade the whole thing and that’s how I just got some chicken and a big plate of lettuce? Lie to my face?? For real? I explained to him that this was a serious matter, to which he kinda rolled his eyes and said, “Well, I messed up.” That was all. There was just a “My bad” attitude, no compassion, and no concern at all.

WWWHHHHAAAATTTTT???? He didn’t say, “I’m sorry?” He didn’t own it? Nothing? I literally went from soccer mom to white-girl-cray-cray in two seconds!

I explained to him that I have a DISEASE! Let’s say it together A F*O(KING DISEASE! This isn’t a choice. I don’t get up and say, “HHHMMMMM, I think I want to be sick this week because it’s such super fun.”

So he meant he’ll pay for the poison? I didn’t go in there to get a free meal, I went in there to celebrate with my husband and daughter!

Two amazing things had happened to me and we wanted to go out – really go out to eat – that’s it. Even then, I just wanted a dang salad, but this guy didn’t care who I was, what I had, or what I was saying. It wasn’t just the eye rolling – yeah, we’ve all seen it – but the BLATANT disregard of my needs as a customer.

It was just more than I could bear, and I gave him a piece of my mind right there in front of everyone. I simply didn’t care who heard it. I did NOT care who saw it, and I swear the waiter just stood there horrified. How dare he? …But you know what? People like him, and celebrities like Joy Behar may think it’s okay to dismiss the needs of others, but if I had a peanut allergy would it have been okay for the chef to feed me peanuts? I DON’T have a food allergy – I have an autoimmune disease – and do you know what? I have been sick ever since Monday. I’ve had a constant headache, swollen joints, brain fog, and a severe stomach ache so bad I haven’t been able to sleep in three nights. I even went to have a meeting with my boss with no makeup and hair barely brushed because I could barely get my clothes on.

Want to see my ankles? 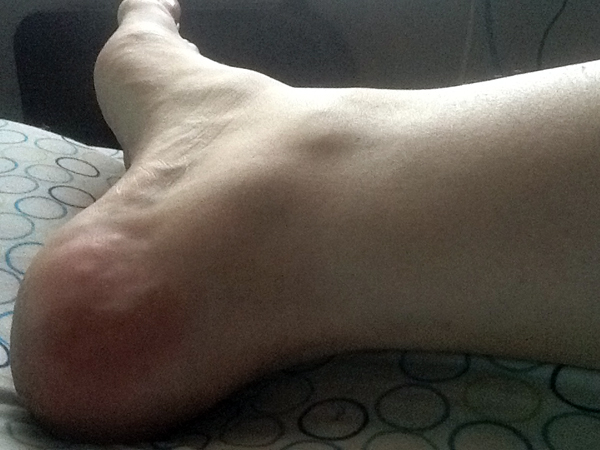 There are no ankles! My ankle bones apparently don’t even exist because I am so swollen. Want to know how hard it is to control that pain? I haven’t slept, I can’t cook, I’ve cried three times for stupid reasons, and I won’t even get into what it’s done to my intestines. I am miserable, and it will take me a week or so to get back to normal.

This week there is no normal for me, only pain, swelling, and a headache that won’t go away. No matter how many Ibuprofen or Acetaminophen I take, it doesn’t work. NSAIDS don’t do much for me in the swelling department, and even then I have to make sure I use a brand that doesn’t have gluten in it because, Yes, Virginia – there is gluten in medicine – both prescription and over the counter.

How about my eyesight? I haven’t seen clearly enough to read or to do my food photography, even if I felt like standing up.

I exude sickness. I’m in pain and even as I type this. I can’t stop crying. I can’t control it. Someone poisoned me. It’s NOT okay.

So I say this to you – Joy Behar – Go Straight To Hell. It’s because of people like you who have the ways and means to tell the world your opinion that this happened to me. My chef thought that gluten contamination was no big deal and he didn’t care about my well being. He didn’t care about what would happen to me. Why? Because everyone thinks that going gluten free is just some fad diet thanks to you and people like you. It’s not. For people like me, it’s a lifesaving measure to stay safe and healthy. SAFE AND HEALTHY, Ms. Behar. How would you feel if someone poisoned you? Do you think I like this? Don’t you think I miss being able to go out and celebrate with my friends and family without getting disrespected, made fun of or outright POISONED? Isn’t this bullying? Everyone is screaming about bullying and how we must take a stand. Well, people like YOU, Ms. Behar, are bullies. And you all suck!

To that restaurant manager – I hope that you NEVER experience something like this, and that you stay safe and healthy. I hope that YOU take measures to be a decent human being and consider the consequences that some of your customers face. Consider what it’s like for me and everyone else who deserves humane treatment and kindness, but is instead served a week or more of sickness. I wouldn’t wish this on anyone – and I mean ANYONE – even you, you giant ass clown.

It is NOT okay to treat people like this. It is NOT okay to get on television, mount your soapbox, put us down, make fun of us, and make it easier for the world to treat us like freaks, or to ignore our feelings. It is NOT OKAY TO POISON PEOPLE! Let’s all say this together: IT IS NOT OK TO BULLY US!